Arts Nova Scotia and the Creative Nova Scotia Leadership Council are pleased to make a special announcement of a new award! Next year the Creative Nova Scotia Awards will include the Black Artist Recognition Award. We recognize this award is long overdue and it is time that this vibrant and essential part of our cultural community is properly acknowledged for its immense value and impact. The establishment of this prize is a positive step for the future and we look forward to nominations in the coming years.

The Black Artist Recognition Award will be open to artists of African descent who have emerged from their initial training and development to become recognized, established artists in Nova Scotia. These awards help showcase the recipients’ work to residents of the province and to people beyond our borders. This visibility will encourage artistic and economic well-being for the recipients and contribute to the health of Nova Scotia’s artistic sector in support of a well-rounded community. The award will match current Artist Recognition Awards in the amount of $5,000. This award is funded by the Nova Scotia Arts Endowment Fund.

The Call for Nominations will open in May 2021 and the first recipient will be announced at next year’s gala.

From Jacob Sampson at the 2020 Creative Nova Scotia Awards Gala:

I’m part of a dedicated committee of Black artists taking care to refine the requirements and processes for this award and to keep Afrocentric values and practices at its heart. Incredible works of art have always been produced by Black artists in Nova Scotia but their contributions to the artistic fabric of Nova Scotia has often been overshadowed or overlooked. An award to celebrate these contributions is necessary now more than ever. Now, we know that Arts Nova Scotia won’t be getting nominations for this award until next year... but the committee did want to make sure the money didn’t go to waste this year. We wanted to make sure Arts Nova Scotia and the Creative Leadership Council could take immediate action and put $5,000 into the hands of a black artist. Toward this end, I’m happy to announce that Arts Nova Scotia will be engaging sculptor/ceramicist Julian Covey to create a physical award for future recipients of the Black Artist Recognition Award. The physical award created by Julian will be handed out to future recipients along with the $5,000. 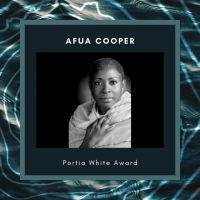